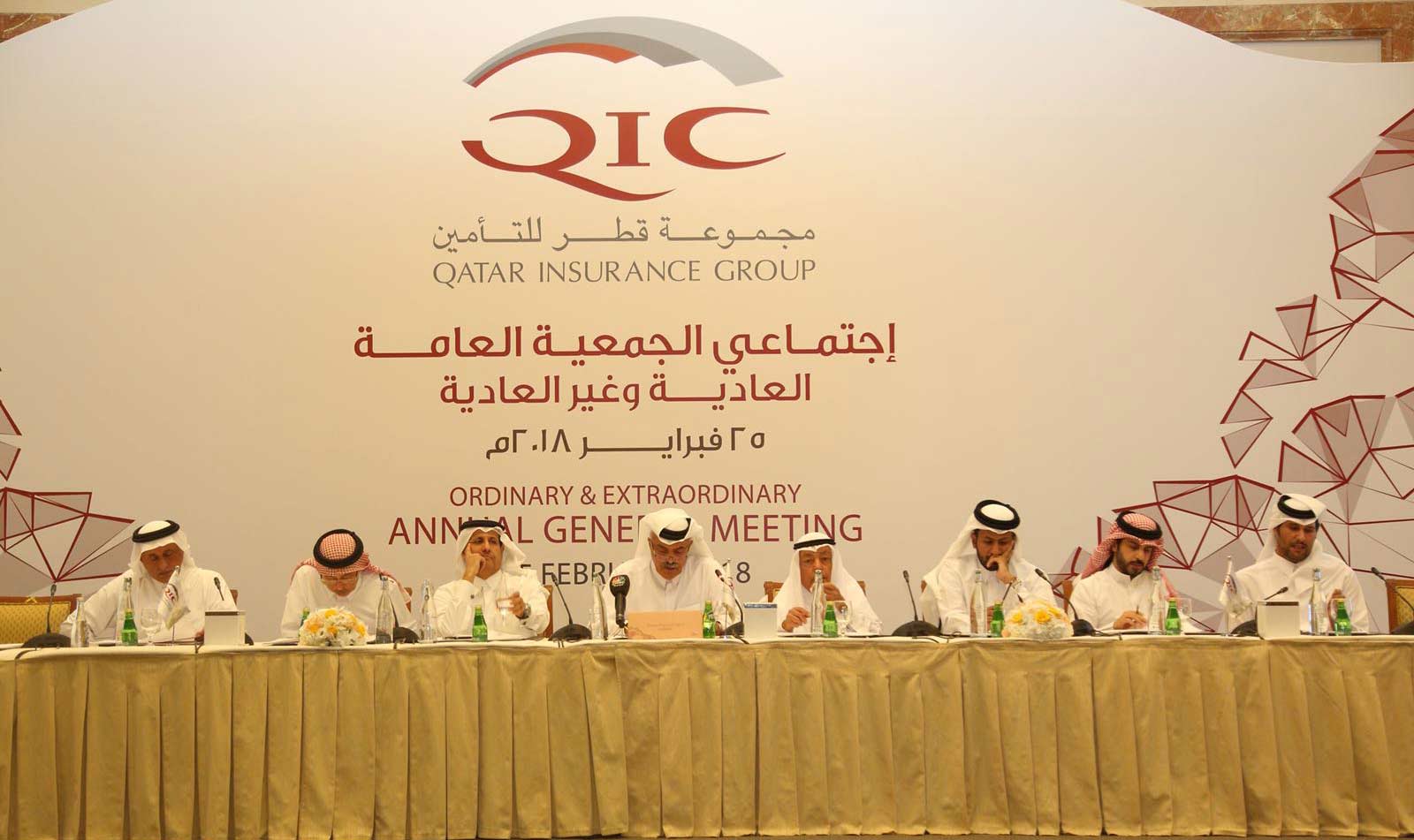 Despite being a challenging year, in 2017 Qatar Insurance, the leading insurance Group recorded strong operational performance, coupled with robust premium growth, taking Gross Written Premium (GWP) to QAR 11.7 billion, up by 18% vis-A�-vis the same period in 2016. The underwriting results for the Group for the year 2017 amounted to QAR 115 million. QIC Group’s consolidated net profit for the full year 2017 came in at QAR 418 million.

The Annual General Meeting that was held yesterday at the Four Seasons Hotel was chaired by Abdulla bin Khalifa Al-Attiya, Deputy Chairman of the Board of Directors. The shareholders discussed the Group’s annual performance and approved increase in the Company’s capital from QAR 2.7 billion to QAR 3.2 billion, endorsed the recommended distribution of cash dividend payout of 15% for the year ended 31st December, 2017 and an issue of bonus shares in the amount of 3 shares for every 20 held. Approval was also granted for QIC’s consolidated financial statements, Independent Auditor’s Report, Board of Directors and Corporate Governance reports for 2017. Further, the appointment of the auditors for 2018 was also finalized during the AGM.

QIC Group’s consistent performance lies in its robust underwriting prowess, global business diversification and strong risk-adjusted capitalization. The Group’s consistent approach of applying global standards and best practices in its assessment of the current and future solvency and capital adequacy requirements ensured that it remained well positioned and capitalized amidst the pressures of global market conditions.

Key contributors to the reported growth were the Group’s dedicated global reinsurance and specialty insurance subsidiaries as well as the life and medical segments of the business emanating from the Middle East. The international subsidiaries namely Qatar Re, Antares and QIC Europe Ltd. (QEL) now account for approximately 75% of the Group’s total GWP.

2017 has been a challenging year for the global insurance industry due to the exceptional natural catastrophe events impacting the US namely Harvey, Irma and Maria (HIM) windstorms. The impact has been exaggerated due to sequential nature of the windstorms that caused a total industry loss of up to USD 100 billion. QIC through its periactin for cheap, generic clomid global operations was significantly impacted by these unprecedented natural catastrophic events. Other major event that adversely impacted insurers operating in the UK insurance market, where QIC Group also had exposure through its international operations, was the sharp and unexpected reduction of the Ogden discount rate in the UK in the first quarter in 2017 which forced the insurers to increase their loss reserves. The industry-wide impact of Ogden is estimated to be USD 10 billion increase in loss reserves.

QIC Group’s net investment income came in at QAR 903 million. This result can be attributed to QIC’s prudent principle of managing the Group’s investment portfolio and pursuing an effective cost discipline. In fact last year QIC was conferred many prestigious awards and titles, including ‘the most oversubscribed issuance from the MENA region’, the highest rated hybrid capital issuance in the region and the first US dollar denominated capital market issuance from an insurer based out of the MENA.

Commenting on the Group’s financial performance in 2017, Group President and CEO Mr. Khalifa Abdulla Turki Al Subaey commented: “Despite global repercussion, which has massively influenced major sectors in the region, QIC Group has witnessed strong business momentum and has performed in line with our expectations.”

He added, “The overall performance in 2017 highlights the Group’s well thought out strategy and its successful execution. For 2018 our outlook remains cautiously positive. We shall focus on consolidation and enhance our operational efficiency. With renewed focus on achieving bottom line driven growth, we will continue to maximize value for shareholders, our trusted business partners and customers while supporting development of the sector and the economy.”